Who Scored The First Goal? (a creation story)

Weekly Writing Challenge: This week, we ask you to invent (or reinvent) a creation myth.

In the beginning, long before the serpent tempted Adam and Eve, before Prometheus gave fire to humans, or even before Joan Rivers was born, people have found it necessary to kick a round object from one end of a field to another.

But why? And when did this all start?

Legend has it that the beautiful game began during the prehistoric wars between the Ugh tribes of prehistoric Britain 500,000 years ago. Heads would roll, literally, during wartime. One day during a lull between the warring factions, (of approximately 15 minutes) someone decided to kick around some of the heads of the fallen. Another person joined in and before you knew it, there were perhaps 100 or so  Homo antecessors kicking around several heads among themselves.

The other warring faction, seeing how much fun it was to kick around such readily available heads, decided to outdo their opponents and bounce it off each other’s knees. And so the game of “keepie-uppies” was started.

Eventually, the two sides, perhaps dead tired from fighting the great prehistoric wars, which was now in its 1,000th year, decided that kicking around a common object between each other settled far more disputes than chopping off the heads of their enemies.

The game was dubbed “Kicking Heads.”

And thus the sport of football/soccer was born!

As time went on, teams were reduced from hundreds to a smaller size on the field, while the rest of the men remained on the bench as substitutes. Stone fences were set up as goals and lines were drawn up to show the boundaries of the football pitch, as games would tend to be played through miles and miles of fields, which was very time-consuming.

A referee official eventually had to stand by, as losers tended to club the winners to death if they felt the game wasn’t going their way. However, the first referee also lost his head because HOW COULD HE NOT SEE THAT THE BALL WENT OVER THE LINE, REF??? After that, rules were put in place for playing the game, the first of which was “don’t club the referee to death.”

Another great change to the sport was the discontinuation of human heads, mainly because they deteriorated too easily and the teams were running out of actual players. Besides, who’s going to volunteer their head for a sport? So they decided to use calabashes, coconuts, or any other type of round, tough-shelled fruit that they could find.

The sport spread over to the rest of Europe during the last ice age when Britain was still attached to the Iberian peninsula via an ice bridge. The Iberians took up this practice and haven’t looked back since, except this year, where they’ve already been eliminated in la Copa Mundial in the first round…but I digress…

One more little known nugget of information is the connection of Stonehenge to the game of football. 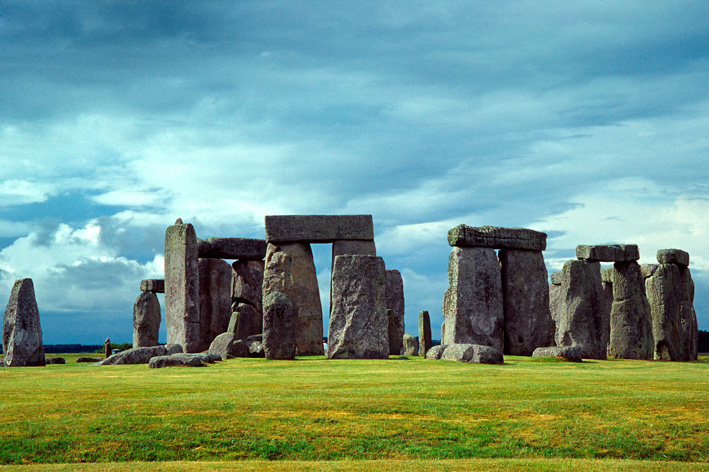 People speculate that Stonehenge’s primary purpose was to tell the inhabitants when the winter and summer solstice arrived.

Not so, not so, says my anonymous source. Word has it that Stonehenge was primarily set up as the first stadium to play interclub match finals. The winning team scored 20 goals to nil. The other team was so mad, they destroyed several stones there. They were given a lifetime ban afterwards, which they are still serving.