Why not try drilling a hole in your head?

This practice of relieving pressure on the brain has been around since the stone age. Evidence has been unearthed of neolithic skulls with the tell-tale hole, making this perhaps the oldest surgical method in existence. Hippocrates (400 BC) endorsed the practice of trepanation in his text “On Injuries To The Head,” to alleviate head wounds. In the Middle Ages, those unfortunately possessed by demons could exorcise them from the head using this method. During the Renaissance, one was assured of curing epilepsy, meningitis, high blood pressure, or just a really bad headache this way. Well, so the practitioner said. 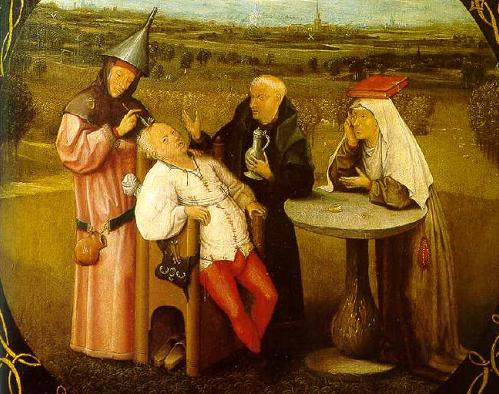 Today – yes, today – there are people trying to get to a higher level of consciousness and will undergo the trepanation procedure. The process is said to increase blood flow to the head, improve focus, and a feeling of increased consciousness.

As this procedure is not offered by medical institutions to healthy individuals, it has been the practice to self-administer treatment using dental drills or other power tools (ouch!) and of course, can be quite risky. After all, opening the skull is usually considered the means to an end and not the entire process. Despite this, it’s estimated that about 60 Americans have undergone trepanation and there is an active society and websites dedicated to the dissemination of information.

The long term results are still inconclusive. What do you think? Would you drill a hole in your head?

Disclaimer: I am not a doctor, nor have I ever played one on TV. I do not encourage this practice. Do not try this shit at home.