Christmas is officially celebrated in Russia on January 7.

This date is actually December 25 on the Julian calendar, which the Russian Orthodox Church follows. The Julian calendar currently runs 13 days behind the Gregorian calendar – the standard international calendar in use today – since the day of conversion in Russia in 1918. 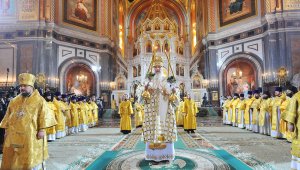 For the 40 days preceding Christmas day, there is a period of reflection as Orthodox Christians fast and exercise self-restraint. On the day before Christmas, fasting takes place until the first star appears, after which preparations are made for dinner. Nativity celebrations on Christmas day will begin in church with a divine liturgy, after which a great feast is held. It is also customary to serve cakes and sing Christmas songs. People will also dress up as manger animals and go from house to house singing various types of carols. These masqueraders would be offered meals and coins before moving on to the next house.

My co-worker, Julia, whom I interviewed for this, reminded me that religion is on the rise in Russia. For 75 years after the Bolshevik Revolution, all types of religious activities, including Christmas, were banned in the the former Soviet Union. She was not raised in a religious household, so when returning home for visits now there seems to be quite a few more religious ceremonies than there were while she was growing up.

Father Frost or Ded Moroz (Russian: Дед Мороз) and his granddaughter Snegurochka (Russian: Снегурочка) are the symbols of Russian winter, gift-giving, and New Year’s. He appeared around the late 1800’s as a counterpart to the other Father Christmases of the time. He is similar to his western counterparts in most ways, except that he is the only one with a female companion. His costume is also fairly intricate, compared to his foreign gift-givers, with long, lavish robes adorned with red and gold or silver, and he is never without his silver pikestaff. During the Soviet era, the costume changed to a light blue.

Unlike his western counterparts, Ded Moroz does not slide down a chimney on Christmas Eve and is not a jolly, over-sized man. A tall, slim man with a long, white beard, he delivers presents door to door to good boys and girls only on New Year’s Eve.

As you can see, there are a few differences between the eastern Orthodox and a western Christmas. However, the basic roots remain where families and friends come together to exchange gifts and celebrate and where children still enjoy receiving presents!