Field Trip to The Hair Salon

Every other month, I take my 12 year old daughter to the hairdresser to get a straight relaxer. Each time, I choose a weekday when it’s not too crowded, I make an appointment, and I make sure it’s a morning event. Usually it’s a school holiday and I’ll take the day off from work. Each time, we still have to wait perhaps an hour or more past the scheduled appointment time to be seen and pretty much half a day is dedicated this bi-monthly event. 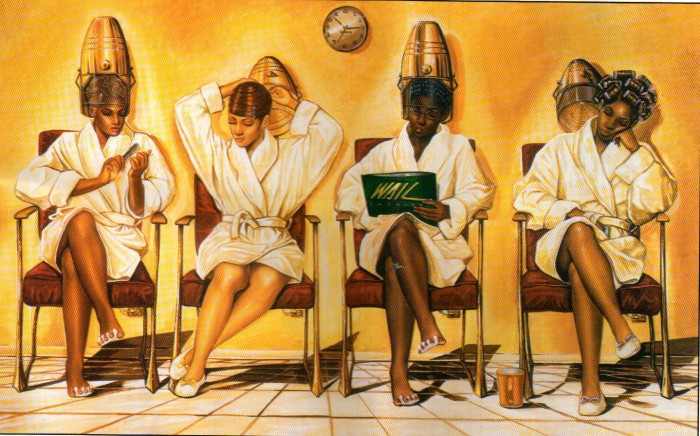 At the end of the appointment, I may or may not be entirely satisfied, but I make another appointment for the next two months.

I do this bi-monthly ritual with my child because this is probably the closest interaction with other black people that she or her brother currently have in their little lives. This is the only black hairdresser that I know of closest to my home for miles.

I am more than perfectly capable of perming my daughter’s hair myself, but I decided that seeing other people who look like her, other than family, was a very important thing.

I must admit that this never occurred to me until one of our trips about 2 years ago to New York city to visit my parents. Once we drove into the city, my daughter asked me if the people we were driving past were Africans. I thought she was joking. I asked her what she meant and she repeated the question. I asked her why. She said because they looked “dark brown” and Africans are “brown-skinned”.

After I picked up my lower jaw from my lap, I told her that it was not only Africans who had that skin color and continued to inform her that she was also descended from at least three different races but has the same skin color as (some) Africans. I also told her that not all Africans have dark brown skin color.

My child was born in Florida and we have also visited Jamaica a few times, but her exposure to others who look like her since we’ve left Florida is rather limited. Our relatives live in other states. She also has some “special needs” issues and takes many things at face value. Therefore, in her mind, she had just finished studying the continent of Africa as part of her Social Studies class, the Africans have dark brown skin, therefore everyone with “dark brown skin” is African.

For me, I have pretty much gotten used to living as a minority in this state. Even at work, I was the only black person there for the first 4 years, until someone else joined the company. Interestingly, neither of us was born in the US. I used to joke with a couple co-workers that I was special and, à la “The Highlander“, there could be “only one!”  But that has been my experience here anyway at the three companies I’ve worked for and I don’t think about it one way or the other. It’s just the way it is and this is where my husband and I have chosen to raise our family.

In this county, the percentage of blacks living here (5%) is below the state percentage (7.9%) and even that is lower that the entire USA (13%).

I honestly never thought the day would come when I’d have to organize a field trip to the hairdresser as a type of life lesson for my children. Growing up, we just accepted that everyone didn’t look the same. Even in my own family, my brother and I look totally unrelated to each other. My kids though, are more sensitive to these facts, perhaps the way some friends of mine would have been, growing up as minorities in Jamaica.

So off we go to “CeeCee’s Hair Salon” for my kid’s hair appointment. We’ll be there for the next four hours or so…